Clomid tablet Used for the treatment of ovulatory failure in women wishing to become pregnant. Clomid is indicated only in patients with ovarian dysfunction. Commonly associated diagnoses include polycystic ovary syndrome, lactation amenorrhea syndrome, psychogenic amenorrhoea, and certain cases of secondary amenorrhoea of undetermined etiology. Additional diagnosis is a post­oralcontraceptive amenorrhea and certain cases of secondary amenorrhea of undetermined etiology.

Clomid is a diarylethene compound (related to chlorotrianisene and triparanol.) Actions: The ovulatory response to cyclic Clomid therapy appears to be mediated through increased output of pituitary gonadotropins which in turn stimulates the maturation and endocrine activity of the ovarian follicle and the subsequent development and function of the corpus luteum. The role of the pituitary is indicated by increased urinary excretion–of gonadotropins and the response of the ovary, as manifested by increased urinary estrogen excretion.

The recommended dose for the first course of Clomid is 50 mg (one tablet) daily for 5 days. WhenTherefore ovulation occurs at this dosage there is no advantage in increasing the dose in subsequent cycles of treatment. If ovulation occurs at this dosage but is not followed by pregnancy, subsequent courses for a total maximum of 6 cycles of Clomid treatment may be administered.

ovulation appears not to have occurred after the first course of therapy, Therefore a second course of 100 mg daily (two 50 mg tablets given as a single daily dose) for five days should be given. If ovulatory menses do not occur, this dose may be repeated for 2 additional cycles but failure to induce ovulation after 3 consecutive cycles at this dosage should constitute an adequate therapeutic trial.

However, ovulation does occur at this dosage but is not followed by pregnancy, subsequent courses for a total maximum of 6 cycles of Clomid treatment may be administered. Therapy may be started at any time in a patient who has had no recent uterine bleeding; but if progestin-included bleeding is planned, or if spontaneous uterine bleeding occurs prior to the therapy, the course of Clomid should be started on or about the fifth day of the cycle.

Although there is no evidence that Clomid has a harmful effect on the human fetus, Clomid does damage rat and rabbit fetuses when given in high doses to the pregnant animal. Therefore, Clomid should not be administered during pregnancy. To avoid inadvertent Clomid administration during early pregnancy, the basal body temperature should be recorded throughout all treatment cycles, and the patient should be carefully observed to determine whether ovulation occurs. if the basal temperature following all treatment is biphasic and is not followed–by menses, –the patient should-examined carefully and should have a pregnancy test.

careful evaluation and selection of patients and close attention to dosage instructions contraindications: and side effects are mandatory. Since Clomid is indicated only in patients with ovarian dysfunction, other possible causes of infertility should be excluded or treated before giving Clomid. Pelvic examinations should be made before each course_ of Clomid is given.

Since Clomid stimulates the ovaries, it may cause abnormal ovarian enlargement due to overstimulation in some patients. With the exception of patients with polycystic ovary syndrome. Clomid should not be given in the presence of an ovarian cyst since further treatment cycle is completed. Patients who complain of *Iv ic pain after receiving Clomid should be examined with care.

If enlargement of the ovary occurs, additional courses of Clomid should not be given until the ovaries have returned to Pre-Treatment size, and then a shorter course or smaller dose should be administered Ovarian enlargement and cyst formation that is occasionally associated with Clomid therapy regresses spontaneously within a few days or weeks after discontinuing treatment. Unless surgical indication for laparotomy exists, such cystic enlargement should be managed conservatively.

The incidence of multiple pregnancies is increased when conception takes place during a cycle in which Clomid is given in a large series of closely monitored patients who became pregnant after receiving Clomid, there were 6.9% (165) twins, 0.5% (11) triplets, 0.3% (7) quadruplets, and 0.13% (1) quintuplets.

Of these multiple pregnancies, 357 Live infants were ppm of 165 multiple births. After excluding 60 neonatal deaths, 297 survived, including 27 of 61 live infants from trip-let, quad–Wietliand quintuplet pregnancies in additions, one sextuplet pregnancy has been reported in a patient treated with Clomid. Patients (wd their huslioles) should be advised of the possibility and potential complications of multiple pregnancies associated with domidtheraft.

Side effects are not prominent and infrequently interfere with treatment when the recommended dosage c’ Clomid is given. Side effects are dose-related. being more frequent and more severe when higher doses of Clomid are administered, the more common side effects are hot flushes, abdominal discomfort (distension, bloating, pain and soreness).

Ovarian enlarge and visual blurring. The vasomotor symptoms resembling menopausal hot flushes are not usually severe and disappear soon after, treatment is discontinued. Abdominal symptoms are most often related to ovulatory (Mittelschrnerz) or premenstrual phenomena, or to ovarian enlargement. At the recommended dosage, the normal variation in ovarian size may be exaggerated. The rare instance of massive ovarian enlargement and rupture of a lutein cyst with hemoperitoneum have been reported

Visual symptoms described usually as “blurring” or spoils or flashes (scintillating scotomata), increase in incidence with increasing total dose and disappear within a few days or weeks after Clomid is discontinued.

These symptoms appear to be due to intensification and prolongation of afterimages. Symptoms often first appear or are accentuated with exposure to a more brightly life environment. While measured visual acuity has not generally been affected, one patient taking 200 mg daily developed visual blurring on the seventh day of treatment which progressed to severe diminution of visual acuity by the tenth day.

No other abnormality was found, and the visual acuity returned to normal on the third day after treatment was stopped. One patient treated during clinical studies developed scotomata during prolonged.

This medicine administration, which disappeared by the 32nd day after stopping therapy. In a 34-years-old patient who had taken 3 courses of Clomid, slit-lamp microscopic examination showed a mild amount of posterior cortical subcapsular opacity in each eye. Ophthalmoscopic examination revealed normal findings. The ocular diagnosis was posterior cortical “senile” cataracts. Ophthalmologically definable scotomata and retinal cell function (electroretinographic) changes have also been reported.

Defects at birth, have been reported in 58 infants from 2,369 delivered pregnancies in mothers treated with Clomid. Four of the infants were in the abortion/stillbirth category 14 were from multiple pregnancies, and the remaining were single births.

Eight of the totals of 58 infants were born to 7 of 158 mothers who received (inadvertently) a course of Clomid during the first 6 weeks after conception.

Clomid, when given continuously for prolonged periods, may interfere with cholesterol synthesis. Serum from patients treated in this way appears to have elevated desmosterol levels. In patients taking recommended doses of Clomid serum sterol patterns are not significantly altered.

Bromosulphothalien (BSP) retention of greater than 5% has been reported in 32 of 141 patients in whom it was measured. Other liver function tests were usually non-Renal. Retention was usually minimal unless associated with prolonged continuous Clomid administration or with apparently unrelated liver disease.

In some patients, preexisting BSP retention decrease even though Clomid therapy was continued. One patient developed jaundice on the 14th day of Clomid therapy. Liver biopsy revealed bile stasis without evidence of hepatitis. Clomid has not been reported to cause significant abnormality in the hematopoietic or renal system, the protein-bound Iodine or in serum cholesterol.

It is indicated for the treatment of anovulation in carefully selected infertile women who wish to become pregnant. In such patients, approximately 70% will ovulate and (provided that there is no other cause of infertility in them or in their husbands) about 30% will become pregnant, it is worthwhile to note that the data from which these percentages were derived included patients who were single and some who either did not desire pregnancy at the time of treatment or had impediments to the achievement of pregnancy other than ovulatory dysfunction.

therefore Ovulation most often occurs from 6-12 days after a course of Clomid. With this in mind, coitus should be timed to coincide with the expected time of ovulation.

Although there is no evidence of a “carry-over effect” of Clomid, persistent

spontaneous ovulation menses have been noted after Clomid therapy in some

endometrial biopsy, an assay of urinary estrogen, or from bleeding in response to

progesterone is a favorable prognosis for treatment with Clomid, but reduced

estrogen levels do not always rule out the possibility of successful therapy,

to conceive is limited, may benefit by having following Clomid courses, injections

of human chorionic gonadotropin (HCG) at about the expected time of ovulation.
Infertile patients with polycystic ovary syndrome who have not responded to

wedge resection of the ovary may respond to Clomid. CLOMID tablet Uses

to thousands of childless couples 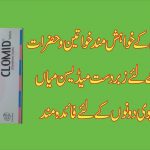 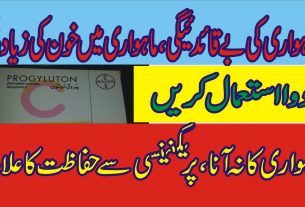