Cipval tablets ciprofloxacin for use in patients who have no alternative treatment options for the following indications: 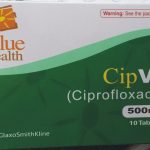